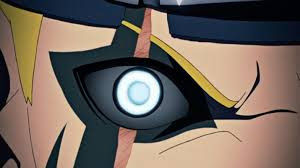 Now anyone whose a big naruto fan and as been watching the anime from when naruto was a genin to now that he’s the hokage and the touch as been passed on to is son boruto.  Boruto is doing things is own way now,some people are complaining about how nothing really interesting since the teaser they gave us of what is to come in episode 1 Boruto Naruto Next Generations but I think it will pick up you just need to remember it’s Boruto’s story, it needs to be different we don’t want another Naruto “THIS IS BORUTO’S NINJA WAY”😜.

Now on to the special eyes boruto which we saw in episode 1, the manga chapter 1 not much as been known about the eyes powers yet because even the author as not thought it through yet but we know this;

My personal belief about boruto’s eye is that it gained its unique properties from reuniting the bloodlines of Kaguya’s sons, with hagaromo’s chakra coming through naruto as an incarnation of indra, and hamura’s being passed down through the byakugans direct blood ties. Let’s know what you think to in the comment section