The issue of DPRK’s nuclear development did not just begin in fact it had commenced in 1965 with its sixth test carried out this year. It is only become a major international issue now that North Korea as developed the ICBM (Intercontinental Ballistic Missile) which can travel as far as 10km and has the entire world within its range . Since 1965 North Korea as greatly improved its nuclear weaponery such as the mid range missiles which can cover 3km also they have recently commenced research on mounting Hydrogen bomb also know as d H-bomb which is 1000 times stronger than the atomic bomb the US dropped on hiroshima during the second world war

Their objective was to protect their soverenity and to gain respect in the international arena . As usual trump takes twitter expressing his discontent with this, threatening to destroy North Korea ( if only twitter had a filter mode for trump) infuriating Kim jung-un And giving them further reason to continue their nuclear programmes in addition to the military drills carried out between the US and South Korea which was seen by North Korea as an invasion attempt which was further aggravated by sanctions placed on the dprk by the UN pushed for by the US

BRIEF HISTORY BETWEEN NORTH AND SOUTH KOREA
The division between ROK ( Republic Of Korea) and the DPRK (Democratic People’s Republic of Korea was as a result of the claim of the two sides to have control over the entire country which lead to their separation in 1945 at the end of world war II. Which lead to the Korean War with the Soviet Union backing North Korea and the US, UN backing South Korea which eventually lead to an armistice (not a peace treaty ) in 1953 so technically they are still at war which other. The US participation in the war as created enmity between them and the DPRK. And periodic clashes between the two countries as further fueled tensions most of these have been an outright attack or with intention to provoke South Korea by North Korea 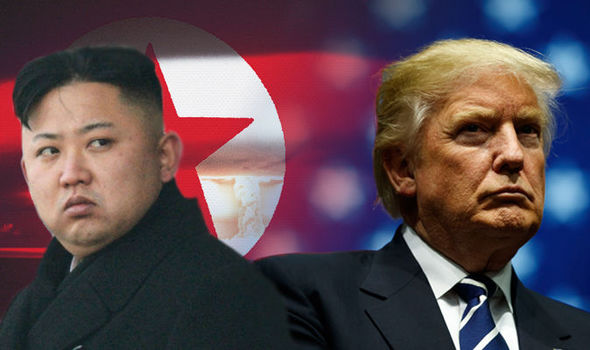 MY PERSONAL OPINION
I understand where trump is coming from with the blind rage and not really thought true comments but it just isn’t going to fix the problem and it certainly is scaring them and in fact if I was them probably won’t be. Let me make practical u r d country that spends about 30 percent of ur income( which I believe is the largest percentage given to any sector) on military development while around 60 percent of the population suffers in poverty just to get someone threatening you and telling you his going to destroy your country. If it where you what would you feel you are the person with the biggest guns and you are out rightly beginning insulted not infront of your co-workers or your friends the entire world. As for Kim jung-un the world is not a play ground we have very limited space here on earth to render barren with nuclear missiles and we are years a way from reaching Mars not to talk of the years it will take to Terra form it as children are getting dumber how chances of survival as a species is looking bleak when whats IN these days for children is wreaking their nuts on railings.