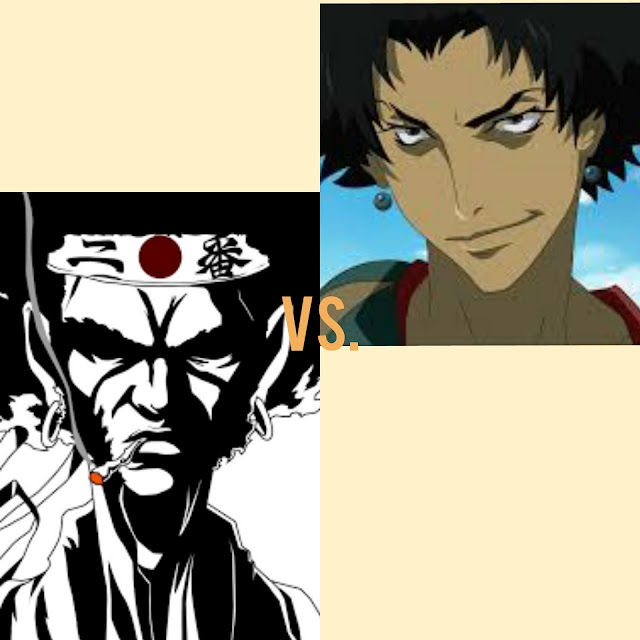 Hey everyone, I kept getting messages about why we weren’t doing anymore show down, so decided to do one this week and I brought for your entertainment to really bad ass swordsmen, that don’t think twice about cutting a person in half.

Once they draw their sword it’s to kill Afro Samurai and Samurai Champloo’s Mugen. And they are not know for being honourable in the fight, this two will do whatever it takes to win. They both cut down a lot of people, but will Afro Samurai seems to later be bothered by his ways, Mugen’s conscience doesn’t seem to disturb him.

One is a samurai whose had formal training and follows the code of Bushido, while the other is a pirate with no formal training, he is  completely self taught and his style is based around a lot of different techniques.

On a side not this were really two anime that I really enjoyed watching the sword fights and the world they lived in was not just set in your normal classical Japan, the story were also great, but if I had to pick one I like more and wish had a second season it would be Samurai Champloo because it wasn’t always having a serious tone to me, there were a lot of laughs and silliness and when the credits start to roll at the end you wished it wasn’t ending.

So first let’s start with a little intro on both characters, then I will add a link if you would like to read more about them. So let’s get started on this demons with a sword and monsters in a fight. First of is ; 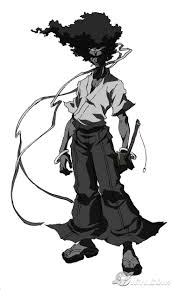 Afro Samurai origin story kind of reminds me of batman, batman as a child witness the death of his mother and father and this changes him into the crime fighting hero, he is today. Afro Samurai while he was a child, also witnesses the death of this father Rokutaro, who is killed by a gunslinger called Justice to collect the No. 1 head band, which is supposed to have the power and make the owner a god.
Afro sees his father killed and this scars him, making him want to kill Justice to avenge his father, he really goes into the deep end for this killing anyone who stands in his way.
Some might argue he kill so many people because he wore the number two head band. For you guys who might be lost on what am saying, there is a rule the wearer of the Number 1 headband can only be challenged, by the wearer Number 2 headband whereas anyone can challenge the Number 2 for the headband, leaving the wearer in a constant state of war, with the world around him.  For more info on Afro Samurai click here.

Afro only uses a long bladed sword with a square gray guard and red coloured hilt and sheath, with a string with a small cowrie shell at the end of it, the sword was previously owned by his father.

Sometimes distracted by memories of the past and his imaginary friend Ninja ninja sometimes.

Mugen was born in penal colony on the Ryukyu Islands in Edo period, little is known about his childhood, even he states once that he does not remember what it’s like to have parents. He as blue tattoos on his wrists and ankles that shows he was once in prison which was for piracy and almost executed.
He likes fighting so much, he usually trys to start one for no reason, womanizer, illiterate in the beginning of the story but like the Character designer Kazuto Nakazawa stated Mugen acts relatively based on his core conviction. Even with all his bad qualities, Mugen does on occasion shows to have redeeming qualities.Click here for more info on Mugen.

He carries two blades, his main weapon a unique sword with a curved blade and an guard with two prongs carried across his back and his other blade is a small tantō which he hides on the bottom of his sheath. And a steel base on his geta.

Prefers rushing into battles without planning, relying on his instincts. Fighting style is poor in closed spaces and also easily be predicted by a very skilled fighter. Also as a weakness for women which as gotten him into may problems on more than one occasion. 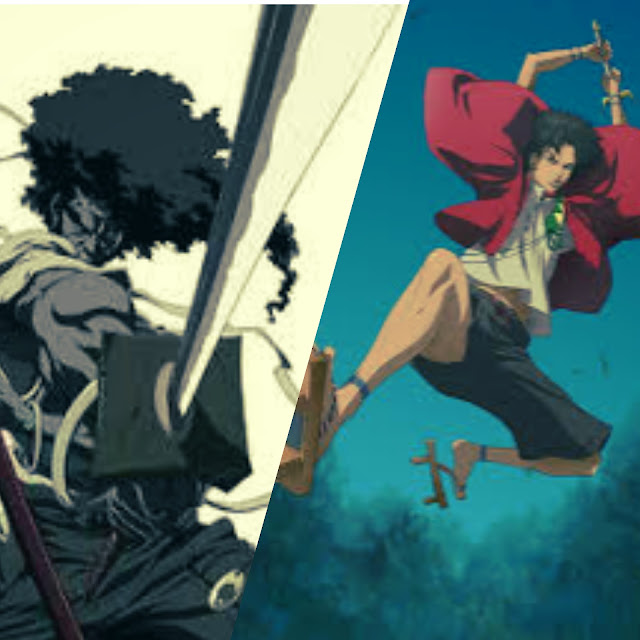 So it time for the throw down and it would be a tough fight for both Mugen does have Ki manipulation but defence could be hard for him, Afro is not a stranger to cutting through steel showing when he fights robots, so he could probably cut through Mugen geta if he used it as a defence. If Mugen loses is leg it will be a deciding factor on who could be the winner.
Mugen is not a stranger to pain though taking a point blank explosion from a bomb. They are but fast and have crazy stamina so it can not be an endurance match. Mugen could use Ki manipulation but Afro is not a stranger to pain too, taking punches and kicks from this that are no human.
Mugen is lacking in this area he fought a lot of battle but never robotic or other inhuman opponents, but Afro Samurai is just a normal man like him, so they both bleed and can be killed.
Mugen does have is trump card of is small tantō hidden, he could lower Afro into a false sense of security and use it you say, but this is Afro Samurai who doesn’t let is guard down in combat, only if he was destressed by something and not concentrating, but Afro could always dodge the attack from his tantō, he as really superhuman reflexes dodging gun fire and even a laser beam at close range.
Afro Samurai could be able to predict Mugen’s fighting style, because it as been stated before that Mugen’s fighting style though usually being unpredictable to most, can be predicted by a very skilled opponent. But we should not forget Mugen can be referred to as a genius on the battle field, easily adapting and learning from his opponents attacks.
Mugen as shown Weakness fighting in closed spaces which from my recollection as never seemed to have that problem. Mugen can sometimes also underestimate is opponents.

It would be a long and drawn out fight with maybe some losing body parts but in the end Afro Samurai would be the winner. I mean Afro Samurai did beat Afro Droid a robot that had a rocket launcher, laser beams and a cybernetically enhanced fighters. But it would be fun if Mugen won though, he would make fun of the whole idear of people fighting over a headband, while picking his nose, wondering where he could get to eat. That if he’s doesn’t get a rush from the idea of being in constant battles with people. 😂😂😂

Hope you enjoy the match up, check out our other articles and please reshare if you like.

My Hero Academia New All For One’s User Revealed

Is Tet a boy or girl?