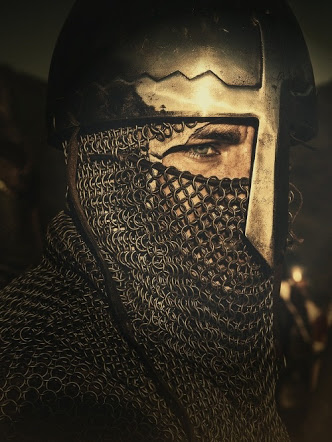 In the mighty walls of Edonia, citizens of the kingdom feel safe and protected under the legions of fighters and the rule of King Hiyadus Windor. Edonia prospered and stood against many threats that seek to end its reign. But because of its evergrowing numbers of legional fighters, Edonia proves to stand against any and all adversaries.

As the sun begins to rise over the peaceful town of Hucus, an early riser wakes up in bed next to his beloved wife. He yawns and stretches his arms out while feeling a soft touch against his bare chest. The man had an impressive build of muscular physique that made many in the town respect him. He had a clean shaved head a pair of deep brown eyes and smooth brown skin that seemed untouched. His name was Mikal Angelheart, a calm man at nature with good tendencies. Mikal was born to Victor and Cecilia Angelheart. Victor, his father, was a soldier in the town’s public militia. Because of this, Mikal did a few basic exercises once a day to build his muscles and heart rate. From his mother, Mikal learned good from evil. In the family, Cecilia was a women of purity and understanding. She never liked conflict, always choosing to talk over fighting. These conditions are what made the Angelheart family live a comfortable and respected life. Now into adulthood, Mikal has his whole life ahead of him and his parents to watch over him. Sliding out of bed, Mikal went to open the blinds in the bedroom while a force of two small feminine hands wrapped around his torso and pulled him back.
“Going to leave bed without me?” his wife joked as she softly rubbed his broad shoulders.
Mikal smiled softly and grabbed the pair of soft hands and brought them to his lips to place a loving kiss on them. He turned around and was met with a pair of bright blue eyes and a loving smile of Lilian Ravenshard. With a head full of lustrous black hair, long legs, and a body any man in Edonia would kill over, it’s no surprise he met her the way he did. One day, Mikal walked in a bar to have a couple of drinks and watch some stage plays. Lilian was a barmaid at the time and was just doing her job of serving drinks. Mikal paid for his last beverage and was about to leave when his peripheral vision caught three men harassing Lilian to come with them. Because of his parents teaching, Mikal was able to make the group leave. After the small altercation, introductions, and a few small drinks, Lilian and Mikal became close friends. After a while of seeing each other more, they got married and lived in together. Mikal is the one usually making errands to stores and shops around Hucus while Lilian uses her skills to keep their house and tidy.
“Heh, only to open the windows.” Mikal answered, running his fingers through her hair.
Lilian let him go and covered back up under the sheets to stay a little while longer in the warmth of bed. She watched Mikal move the window blinds to the side and let sunlight in. Once he was done, he moved back by his wife’s side in bed. For sleep wear, Lilian was in a long white ghost like gown that stopped just above her feet. Mikal wore simple boxer mostly because he listened to Lilian’s request about feeling safe under his arms.
“So, you have any plans for today?” she asked all snuggled up near her man.
“Well, I was going down to the faming fields to see if they need an extra hand with crops.” Mikal suggested.
“That sounds nice.” Lilian added. “We could use the extra food and spare money.”
“Mm, then I thought about what you said to me two nights ago.”
Lilian sat up with a bit of a surprise stare at Mikal’s words. Two nights ago at a small water bank that overlooks the entire of Hucus, the happy couple relaxed in each others arms when Lilian suggested that Mikal should become a Knight or Paladin for the king. Mikal admitted that the time he was a child with his parents and growing up as a young adult, he did have thoughts of becoming an Adventurer. Even though the job would take days, weeks, and even months away from loved ones and home, an Adventurer is one of the most fulfilling jobs in all of Mejor. By orders of either King Windor or a sergeant they are assigned to, Adventurers are thought to be the most helpful group amongst a kingdom.
“Wait, seriously?” Lilian questioned with uncertainty. “I mean, it would be very exciting and new, but…”
Mikal looked at his wife as she stopped from saying anything further. He knew just as well what was on her mind at the moment.
“I’m sorry.” Lilian softly spoke.
“I understand.” Mikal said, pulling her body closer against his. “There’s just way too many ways for me to get hurt, lost, or even killed.”
Lilian shuddered at that last comment. An Adventurer’s job is rewarding in many ways, but their only guarantee at survival is their quick thinking, Knowledge of Mejor, and most importantly their strength in battle. The fact of death itself being an outcome is what keep most from venturing out into Mejor.
“Are you sure about this Mikal?” she finally asked, looking up at her husband.” I don’t want you to think I forced this upon you.
Mikal answered with a soft, playful tap on her nose.
“Now sweetie, when was the last time you ever forced me into anything?”
Lilian looked down in thought and shook her head. Realizing he was right, she placed a loving kiss on her husband’s lips and laid her head back on his chest.
“If you make the decision,” Lilian began. “I will fully support you.”
Mikal nodded and softly stroked her head. It was at this moment that he realized her best trait. Lilian was just as understanding as Mikal’s mother. There was never a day when Mikal was sad or upset with his mother. Lilian trusted Mikal with everything, even her own life.

Closer to the inner most city of Kremvor. two guards paced along the side of the walls on a small inspection run. Both guards were moderately fitted with a suit of armor and a single longsword of fine metal.
“It smells like gobshite over here.” one guard said with a scruffy voice.
“Stop complaining.” the other said as they came to a small halt. “At least nothing attacked us in a good couple of years.”
One of the patrolling guards had ginger colored hair and beard. His hair was very curly and thick, unlike his patrolling partner. Slicked back grey hair with green eyes and a small patch of hair on his chin. King Windor has guards all around his kingdom to survey the walls. Amongst all the attacks Edonia endured, the attack from The Longtooth Orc clan was the most devastating one to ever happen. Much has been repaired from that faithful day, but the loyal people hasn’t. Because of the raid, Orcs have became a new fear for people and a greater reason to stay in Edonia. The leader, Jordak Skullcrusher, made a promise to raid Edonia again with greater numbers and to kill King Windor.
“Still,” the curly haired guard started, “I just hope another raid like that one before comes again. Ugly bastards need to stay where they belong.”
“Ha, ain’t that the truth.”
The two shared a laugh and walked some more before a loud bang noise ranged off nearby. People passing by felt and heard where the loud noise came from. Both guards drew their weapons and looked through the crowd of people that had arrived.
“Is everyone alright?” the grey hair guard asked. “What the hell was that?”
“I don’t know, but it sure was lo-“
The other guard was cutoff from another hard and loud bang sounding off. The crowd of civilians were screaming with some running away in terror.
“Please, stay calm!” one guard called out.
“Break it down!”
Both guards turned back to the wall. The wall got smashed in by a giant wooden ram with extreme force. Rock, stone, and debris was sent into the crowd of people that yelled and ran out of fright. From the huge sized hole, many orcs brandishing axes, large double sided hammers, and jagged blades. Civilians scattered as fast as they could before being brutally killed. One of the two guards countered a single orc before engaging in combat. Their weapons clashed multiple times with sparks coming off. He parried the orc’s axe and plunged his sword deep in its chest, striking the heart with the slick sound of tearing skin. He turned around and stared at his grey hair partner.
“What are you waiting for, you idiot?! Get to the king and tell him that- AAAAHHHHHH!!!!”
From behind a jagged blade sliced through his chest. The large orc behind the guard stood with an evil grin. The orc was a male and stood much taller than his minions behind him. His skin was a dirty smoke color with tribal markings on his face, arms, and fists. His clothing consisted of tattered red belt, waist braces, and brown fur boots. His hair was black, matted and long down his back. He held his blade up with the dead guard on the blade still.
“Death to the king!”