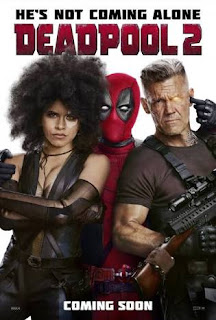 Out wisecracking mercenary Deadpool is back, the superhero film based on the Marvel Comics character Deadpool, it’s the sequel to the 2016 film Deadpool. The film is directed by David Leitch from a script by Rhett Reese, Paul Wernick, and Ryan Reynolds, with Reynolds starring in the title role alongside Josh Brolin, Morena Baccarin, Julian Dennison, Zazie Beetz, T.J. Miller, Brianna Hildebrand, Jack Kesy, and Stefan Kapičić. In Deadpool 2, Deadpool forms the team X-Force to protect a young mutant from Cable.
advert
end of advert
So we can expect a lot of funny, over the top action  scenes. And with more characters from the the Deadpool series appearing, it should be quite a show.
This sequel was even planned before the release of the part 1, in February 2016 and Deadpool 3 is already in development. It will be released on 16 May 2018.