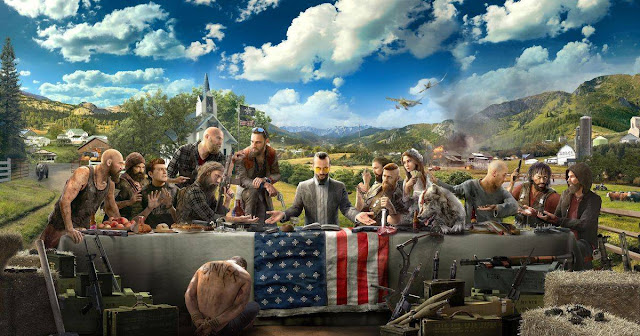 Microsoft Windows
Xbox One
PlayStation 4
Far Cry 5 rural America is a nice change of setting for Ubisoft’s first-person shooter series. It’s the eleventh entry and fifth main title in the Far Cry series and was released on March 27,2018. There is so much fun to be had in the game, you will be busy for hours roaming around the world, before you start playing the story mode.
In the fictional region known as Hope County, Montana full of farmlands and dense forest making for a wonderful open world. Also having fan-favorite features from previous installments like cooperative play (from Far Cry 4) to animal companionship  (Far Cry Primal). Along with a lot of vehicles and weapons plus untamed animals you can use against your enemies of Eden Gate.
Who are Eden Gate, you ask they are an evil doomsday cult, that have taken over the fictional area in dictatorial rule, lead by a calculating, fanatical preacher Joseph Seed. If you are not new to the Far Cry series this antagonist promises to be memorable as all his previous predecessors, in Far Cry tradition.
You will play as an unnamed junior deputy sheriff, who is trapped in Hope County and works with factions of a resistance to liberate the county. In this new installment player experience is different for each player, as you are dropped into the game world with little context, direction or objective markers, so you are made to navigate the world on your own, with the whole map fully open unlike before were the game world was gradually opened up, as you advanced in the game.
There is also a recruitment system were locals in the county can fight alongside you. To discover new story missions, events and other characters, players must forge relationship with other characters. And you can also fish and tame wild animals to follow you into fights.
Far Cry is a game that is definitely worth a playthrough.
Click here to find out more