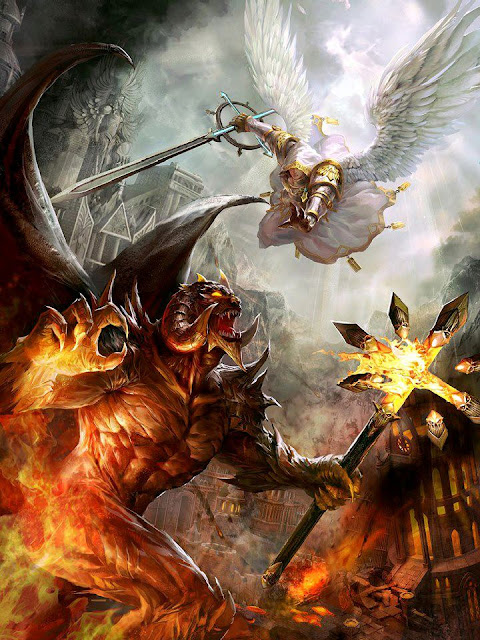 On the rooftops, me, the demon, and Elisia was having a discussion about Futura. In the back of my mind I can already hear my Lord shouting at me for my actions. I could care less at this moment. Only thing that mattered to me was Futura and I needed to get it back from whatever or whoever stole it.
“The truth, angel, is that a human took Futura from Heaven.” the demon said.
“Impossible.” I voiced back. There was no way a human could easily walk in heaven and walk out.
“Stupid angels.” He countered quite annoyingly. “When are you all going to learn there are more than conventional means of going in and out of places? This human was a Duskbreaker.”
My eyebrows went up as the demon smiled knowingly at me. Can’t lie, I did fall for it. He knows I know what a Duskbreaker is. I’ve seen them before, fought a few since none of the ones I see ever learned to control their powers. They were ordinary humans with the powers of either angels or demons. They can ascend to an Arch or even a Devil, but that is so far unheard of. I have yet to meet a human with that power. Now, I want too.
“Where can I find this Duskbreaker?”
“You should know. Don’t you angels see everything in the skies above?” He sneered and stood before us.
“My patience is running thin. Either I get clues or you can lose another arm.” I gripped my sword tightly.
“Tagua, I feel something strange.” Elisia informed me. She was right.
I quickly turned around and noticed a strange discomfort in the air. It was just below us. This wasn’t a game, this person had power behind him and he didn’t care at all how he showed it.
“See ya suckers!” The demon flew off, cackling as I turned and narrowed my eyes at him.
“Tagua, that might be a Duskbreaker.” Elisia’s voice was more serious this time. I knew when to take her serious and when not to. This was serious.
I quickly hopped down to the ground floor with my wings. Upon landing, I cracked the ground with my impact. It took me a quick minute to assets the situation before me. His chest was bare while he wore black jeans and white sneakers. He had black wings that was as large as mines. His eyes were a cold silver colored that shined in the light of the sun. His hair was layered on his head and blew in the wind as we stared each other down. His eyes went towards my sword then back up at me when he finally decided to say something.
“You’re an angel, aren’t you?” His voiced was low, but deep.
“What are you doing here?” I only had a split second to jump back from a large black hammer that completely shattered the ground I was standing on. My eyes narrowed at my new opponent. “Guess I know now.”
I flew forward and swung at sword in an upward arc, casting a wave of light that raced at him. I watched as he stepped to the side and let my attack demolish the skyscraper behind him. He took flight to the air as I have in chase, the building behind us falling to the ground in debris and dust that mattered little to either of us. He spun counterclock wise and aimed his weapon at me that quickly blocked with my sword. The loud contact sound sent a shockwave into the other buildings around, destroying windows. I pushed him back and sent two more blasts of light at him at inhumane speeds. He dodged both very well, signalling that he saw them with ease. We both leveled out and stared at each other.
“You’re an Arch.” he simply put.
“And you are no fallen angel.” I examined. “I laid several fallen angels to rest and not one lived to say how. Which only lives one last solution.” I pointed my blade at him. “You are a Dusbreaker.”
He smiled and held his giant hammer in his right hand. With black and wavy distortd air surrounding his weapon, it formed into a long staff with curved angular blades on each hand. I was actually impressed he could form weapons with ease at his disposal. He was no ordinary Duskbreaker.
“I have no reasons to fight you. I only want one answer to one question.” He demanded.
“That makes two of us.”
“My answer first.” He drew his weapon, causing me to do the same.
“Not going to happen.”
He rushed me and swung his weapon down at my head as I blocked again, locking in a battle with him as we sneered at each other.
“Tell me where Futura is!”