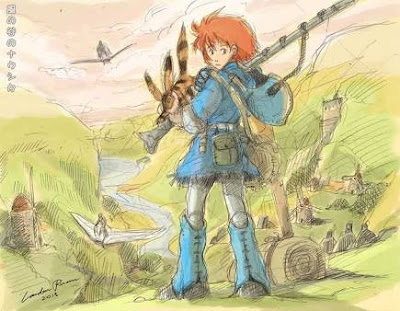 Without a doubt, the art is the reason to watch this one. It takes place in a beautiful fantasy world 1,000 years after the apocalypse. Some shots of the landscapes feel truly magical, and the creature, vehicle, and aircraft designs are excellent.With regard to the story, there’s not much. The central message is NATURE = GOOD, TECHNOLOGY = WAR = BAD, delivered with all the subtlety of a plummeting anvil. The bad people wear armor, drive tanks and planes, and try to fight off the dangerous creatures when threatened by them. The good people are helpless innocents who listen to what nature-loving Princess Nausicaa tells them. Also, everything is inconsistent, beginning with the quality of the animation itself: some shots have much more detail than others. Some of the soundtrack is somewhat out-of-place synth, other parts are the orchestral music to be expected of Studio Ghibli. The film also suffers from failure to “show, not tell.” Nausicaa repeatedly tells us fighting is bad but is nonetheless good at combat and doesn’t hesitate to participate in it. She also has a tendency to over-explain everything. Also, every character is a flat archetype: the good king, the wise old blind woman, the cutesy children, the evil warlord, the sycophantic second-in-command.Altogether, it’s not bad, but it’s not the masterpiece it’s said to be.