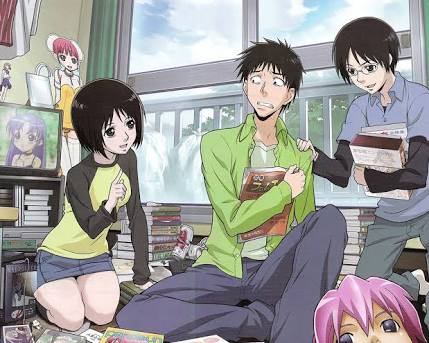 NHK ni Youkoso! What do I think? Summary: A lot of people feel very alone, the abundance of loneliness is extreme in our everyday lives. Life can be hard, and this anime truly shows how hard life can be for people that are referred to as ”Hikikomori,” which sort of means ”Recluse.” Satou Tatsuhiro is a 22 year old guy who lives alone in his one-room apartment.Satou’s life is full of misery, denial & sadness. He doesn’t have the will to get a job, he is not excited about meeting anybody and he lives a unhealthy, careless life. This anime follows the course of Satou’s “therapy” or “counseling” that he receives from a local girl called Misaki, as well as other misadventures which involves various characters, but not a grand amount.Story: The story manages to thread through several situations, show the background of the most important characters in an astounding way which I initially thought was going to be impossible. I am thoroughly impressed by the story, as well as the narrative that is provided by the main character.Art: The art is simple, and can sometimes look very low-budget. The style is very mid-2000’s, isn’t overly moe in any way and adapts more of a realistic artstyle.Sound: The music is memorable, I will probably remember this opening in 10-15 years from now. The voices, as well as the ambience are well-placed and invokes all sorts of feelings during the anime’s progression.Character: Without turning every single character overly depressed, I am very impressed by how the director; Yamamoto, decided how the character development would progress. Seemingly all of the characters manage to learn from their mistakes, while at the same time mimicking true human feelings and struggles. The main characters are enjoyable and will make you fall in love with them.Enjoyment: NHK ni Youkoso! makes me enjoy understanding the fact that sadness, loneliness and struggles, are something we all feel and must endure. I truly hope that I am not the only one who felt extremely well and happy after watching this. Overall: I would recommend this to anyone. Even the most successful, high-profile businessmen, managers, executives should watch this. This anime glimpses into true emotional torture. It also shines a light on a part of society who is in pain, both mentally and socially. If you are planning on watching this, I can only say, get ready for your mind to be twisted around. Get ready to laugh, get ready to love and cry. Maybe all of them at the same time? Welcome to the NHK!

Top 25 Best Sad Heartbreaking Anime That Will Make You Cry