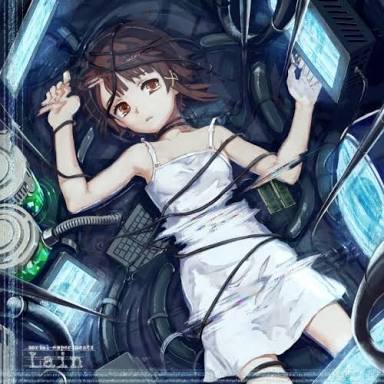 Circuitry hangs low over the city like a spider web. A barrier that represents one layer beyond our own. A layer of the wired. The weird. The mysterious. Power lines, low hums of generators unseen, these are motifs through which director Ryuutarou Nakamura expresses the indulgence of a society bordering on dystopia. Power, mystery, and growth. The symbols associated with a spider. It’s web. A perpetually connected string of vines that ensnares victims.

The shadows aren’t black but splotched. They are made up of moving ink, the bubbling of a cauldron. The shadows move and hide anything and everything. Ethereal, they walk and cover or uncover. Whenever you are to wander into the over-blown, exposed outdoors, you see a world that is one step behind, the people disappear, desperately grasping progress. That progress manifests in evolution. You are alone. You are empty. You are without friends or anyone who understands you. You poor, poor girl, thick-brimmed glasses on your face and a frown that never dissipates. You see an opportunity. The opportunity for freedom, to escape, to become something more.

Fall. Fall all the way down. Windows shatter and the metal of the roof crumples under your weight. You don’t know. You are no longer restricted by the heaving, useless body that no one understands. You are now a part of something more.

Or you. The one frustrated with work. The grind. It weighs heavy on your back and you can feel your ribs begin to crack. You believe in something more. That something right above you every time you walk outside. The shadows can’t mask that. The wires drape over, like taunting beggars asking for you to come. You do. Screw work, screw obligations, you double down. You don’t need your body. You need influence, you want religion, you want to be the religion you want.

You Don’t Seem To Understand.

Lain transposes the meta. View the wired as a look into the real world through the eyes of the fake world on screen. We are presented with falsehood, we see their reality, we see our own through that same reality. Blurred images of parking lots and bridges run through many filters. Hardly distinguishable as real but they are. These are the images Lain uses to show us the parallel. The meta.

Far from us but close anyway. Like an infinite loop. The presentation is purposefully confusing and fractured. The narrative lacks a timeline. We see a poor girl, fourteen, introverted, shy, a parallel to the two souls lost. One on the train-tracks, one splayed out on the streets. This girl, Lain, is given a window to the new, weird, wacky world of vaporwave fuzz and dripping cyber heaven. The wired is just that. A depiction of future as seen from the past that purposefully paints itself as completely dissonant than the path we took. Yet it is an esoteric narrative that is hauntingly believable in the minutia, but ultimately unbelievable in the idea. The ideas here, which are undoubtedly avant-garde and esoteric, are made to be siphoned from by the viewer. A string of information given to you.

What do you take from the depiction of the internet? The web that harbors answers and routes of communication that might seem completely unbelievable. What would you have said in 1998? What would you have said in 2000? 2005? Later? Lain isn’t timeless because as time passes what you take from it is utterly different and not through the intent of the writer or director. It happens to be that because that is how technology works. The creators know that. We should’ve too. Lain works because it isn’t timeless. If it were then the answers we seek would be malformed. Technology isn’t timeless, much like this series, it becomes dated.

Lain’s room evolves as she does.

To lose yourself in duality. Your self-identity melts away into pixels and becomes yet another blue screen that hums and glitches. The device which you look at the said screen is shaped like a gun. You press the trigger and the screen collapses and the gun is holstered in your hoodie. The hoodie is worn by a boy no older than thirteen.

Lain experiences ego death. Her loss is documented through thirteen brutal episodes. Each one adding layers. Layer one is weird, Layer ten is love. The layers evolve as does her room. Tubing stretches, viscous green coolant dashes through and feeds her system. Every time we see her room something new has been added. This persists until Lain lives in the cyber-heaven that she first got to witness in layer one. Consumed by the internet. No doubt people can relate. Anime fans especially. Let the flickering screen be the food for the day. The duality of not only yourself but the difference between fiction and reality. A topic which can be read into at any time and place. The bad side manifests and becomes you. You lose the understanding you saught.

In Jungian Psychology this is the psychic death. The fundamental change of the psyche. This could be becoming something new, becoming a god, realizing your true potential, your strength, the power, the mystery unfolds. Yet it can also be understanding who you were to begin with. The delusions fade and you see yourself for the first time, not in the third person, but in the first.

They can be false. Once you forget them, the notion that they ever existed comes into question. The final theme of Serial Experiments Lain. An experiment in truth. Relating to truth and fiction, but only enough to draw the parallel. Once you remove yourself, truly remove yourself, you never were there, to begin with. Just a fleeting thought triggered by minutia.

Lain makes this connection. Tea and madeleines. Written as an essay by Marcel Proust. The idea here is that certain triggers may cause forgotten memories to erupt back into the conscious. The memories of a childhood friend, the first time you tasted soda, the eyes of a deleted girl that is as much a part of you as she is everyone. The theme only holds weight to those who believe that the final comment of the series holds weight. A divine being that carves out a location for itself, out of reach by all but perhaps in sight. Like the wires that hang over you every time you venture outside.

Every idea builds on itself to paint a picture of more than just a culture. More than just a narrative. A holistic approach to storytelling that relies on encapsulating a present day. A present time. You laugh, but it is a period piece unlike any other. One that may fall victim to quick production or off-model animation, but one that wants to never be just another fleeting thought.