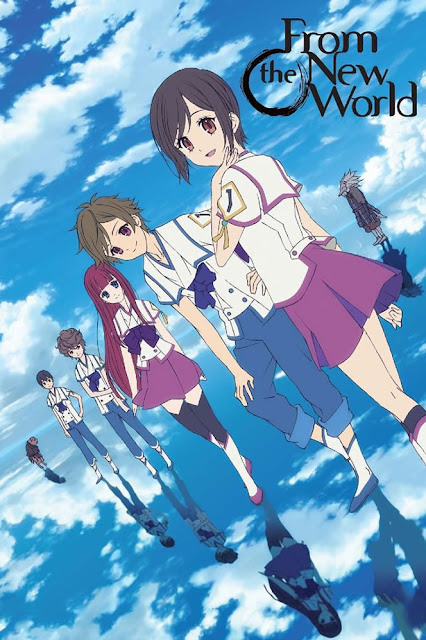 These are the words I said to myself when I had the pleasure of completing Shinsekai yori (From the new world). A-1 Pictures, while known from some of it’s notoriously bad series, has really left in me shock on just how they could produce a compelling, unique, and deep story.

Along with it’s fantastic characters and their development throughout the series, to the sensational and masterpiece soundtracks used, Shinsekai yori manages to do almost every aspect flawlessly. It’s an anime that manages to leave viewers reflecting on real world issues with Shinsekai yori’s universe and how everything is not all that seems.

It tackles on the issues of lust for power, rising against tyrannical governments, morals, beliefs, and psychology of not just humanity itself, but from the other intelligent species living on Earth, and never once did it leave me in boredom throughout the short length of it’s 25 episodes run.

With all it’s praise it supposedly delivered, is Shinsekai yori truly a masterpiece that I would recommend anyone to watch? Is there any aspects about the show that I felt was weak, or tried to execute but not properly? Like majority of my reviews, I’ll be going over the the 6 main points: story, artwork, sound, characters, overall enjoyment, and my summary thoughts with the final verdict.

I’ll try my best to keep this review completely spoiler free as possible as well, while only covering plot points and scenes from the first episode.

“We have to change our way of thinking if we really want to change the future.” – Saki Watanabe  The most notable and praised element you’ll find when someone were to recommend Shinsekai yori to you is how it handles the story throughout the series.

The rich lore and captivating storyline will get viewers invested quickly in the show. This could even be done in the very first episode, like it was for me. The idea of an outbreak of Psychokinesis, the ability to manipulate and change matter, whether it’s making yourself or objects fly, setting something on fire just by looking at it, killing someone by just staring, is executed very well in the opening scene, as we get to know right away what’s happening to our present, the fall and destruction of the old world, and the rise of the new world 1000 years later, into the future world of Shinsekai yori.

From there on, the story follows the perspective and narration of Saki Watanabe, a 12 year old girl who obtains the powers of Psychokinesis, or what they call it now: Cantus. We also get to see how the world 1000 years later is. To our surprise, there’s no technological advancements or flying cars to be found, and it looks like society has taken step backwards by isolating their scarce and fragile communities from one another.

This is all do to humans becoming the dominate force of the world, where Cantus is the building foundation of how their society functions.  There are also many other species roaming around the planet.

The most notable and intelligent ones, the Queerats, are predecessors of the naked mole-rat. They’re bipedal, can understand human language, and worship humans as “gods” from their Cantus. They have many colonies each ruled by a queen, and some work as slaves for the humans, swearing complete and absolute loyalty.

Along with Copy-Cats, supposed cat-like creatures that are rumored to come after human children, and Fiends, humanoid creatures that the elders teach the children about to prevent one from ever coming to the village, are all mentioned briefly in the first episode, but later on explored further into the story, and become very significant plot points.

The psycological, science-fiction, and supernatural elements all come together to produce a gripping and epic storyline, leaving almost no details or plot-holes behind.

The audience at first may not fully grasp the big picture the story is trying to tell you at first, but later on, specifically in episode 4, we get to see how this supposed utopian society the humans live in is not all it seems.

With a very good beginning, an even better middle, and fantastic conclusion to the story (quite possibly the best I’ve ever seen), it’s no surprise to say that the story of Shinsekai yori is nothing more close to a masterpiece that you’ll ever find in an anime, and rightfully deserves that title.

The artwork of Shinsekai yori can best be described as being very diverse and unique when it comes to most artwork in anime. It makes the setting for a world that’s taken a step back of any kind of futuristic technology shine brightly.

Visuals, the environment, and character models are all breathtaking to look at. There was not one time that I noticed any horrible animation or questionable choice of visuals/colors for a scene.

Blending and shading of scenes are also done very well, weak at times, but executed properly. Whether it be the night sky, mountain ranges, forests, buildings, Shinsekai yori delivers quality artwork, a factor not heavily discussed when describing your favorite anime, into a dynamic and awestruck world.

Only second to the story, the sounds and music that Shinsekai yori produces incorporates the strengths of compelling human emotions with realistic sound design and high class soundtracks to bring life to an engaging story.

Every sound; whether it was simply as turning the page of a book, the listening of footsteps through the school, the background noise of wildlife, and the echoing of voices, Shinsekai yori always used sounds appropriately and in a meaningful way to describe by sound what’s happening right now. This was the first anime ever that I actually appreciated the different sounds used and how it set up the mood. Simply amazing.

The OST tracks, just like the various sounds, all were very unique and memorable to listen to. ‘Traditional Song of Shadows’, a very commonly used soundtrack in the anime, always gave the feeling of suspense, anxiety, and hype whenever it came on, and was always used in the right situations where the audience was left to feel emotions and have questions.

‘History Of Despair, used for compelling and especially suspenseful moments, filled me with emotion while listening, I could actually feel the tension and suspense inside of me. My personal favorite and arguably best soundtrack: ‘Wareta Ringo’, the ending theme for episodes 1-16, is a masterpiece, and I never once skipped the ending just because of this fantastic song – And I always skip the endings.

With greatly used sounds, very well done composed soundtracks that’ll get you tapping your foot everytime they come on, the sounds for Shinsekai yori is one of the best soundtrack I’ve ever witnessed in anime, right next to Clannad and Clannad: After Story’s soundtrack.

The characters of Shinsekai yori, like the rest of the anime, were crafted and thought out beautifully. Character development, dynamic and complex personalities, interesting backstories, and realistic values were presented in the majority of the cast. At the top of my head, I could only think of 2 or 3 characters that may have had wasted potential, but not too many fell under that category. The main characters in Shinsekai yori are all children, so you get to experience they’re perspectives in their dystopian society.

Saki Watanabe: The main protagonist and narrator of the story. A very outgoing, yet sensitive girl who values her friends, family, and town very dear to herself. She argues a lot with her friend Satoru, and is very close with her two childhood friends Maria and Shun. She has trouble at first with her Cantus, but gradually overcomes it. She is my favorite character, as we get to see her fantastic character development the most.

Satoru Asahina: A main character of the story. A very observant and intelligent, yet energetic boy who likes to pull pranks and tease Saki a lot. He’s a very likable character that at first I did’t think much of, but later becomes very significant and important, especially near the middle and ending.

Shun Aonuma: A main character of the story. Like Satoru, he’s very clever, and the most mature one out of the group. He’s the brains at the sage academy with near perfect scores everytime. The elders expect great things of him when he reaches adulthood. A pretty complex character, but not nearly as great as Saki and Satoru.

Maria Akizuki: A main character of the story. Saki’s best friend who’s the most feminine of the group. She’s shown to be protecting and commanding Mamoru, the groups other member a lot. She’s remains a pretty static character throughout the length of the series.

Mamoru Itou: The final main character of the story. He’s a very shy, timid boy who rarely expresses his concerns or opinions in the group. He’s my least favorite of the main characters, but by no means a bad character. Like Maria, he’s also a static character.

Squealer: A supporting, but important character later on in the story. He’s a queerat with very high intelligence, sly, and astute. He is the representative of the Robber Fly colony of queerats. He’s my second favorite character, and possibly the most complex and dynamic character of the storyline, with fantastic character development near the ending.

My experience and enjoyment with Shinsekai yori was nothing like I’ve ever witnessed before. I’ve heard praise, mixed opinions, and spite from this anime before, so I can going into it without the intent of thinking highly of it at first. But boy, was I completely blown away over how good this anime actually is.

Like mentioned above, it just does almost every aspect right. It gets the plot moving smoothly, with making sure the audience knows what’s going on through the narration, delivering a fantastic story.

It was fantastic artwork and scenery, masterpiece soundtracks and different sounds used to fit the mood and premise of the scene, very well crafted characters who have great character development and important roles, rarely being wasted.

This anime will make you think, it’ll make you feel sad, happy, emotional, and an array of different feelings while you experience Saki Watanabe’s life with her friends in the new world ruled by the super-human ability of Cantus, and how it affects everything around the world, the different species and how they interact with humans, and the government of a supposed utopian society not being all that meets the eye. You will want more after reaching the fantastic conclusion, like I did.

A recommendation to anyone who wants a compelling, dark, psychological story, with all other aspects of characters, sound, artwork, and enjoyment being near perfect in every sense. Shinsekai yori is an anime I’ll never forget, and will remain in my top favorites for years to come.