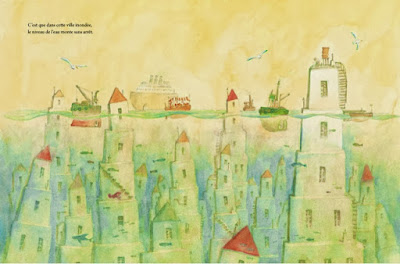 “…………………………………………………” – ??????This unnamed main character never utters a single word, nor does any other presence in House of Small Cubes’ short 12-minute runtime. And yet, through the power of strong, detailed visual storytelling, it tells a tale as rich and captivating as many titles 25 times its length.In a world of continually rising water levels, a widowed elderly man must continue building layer upon layer onto his house peeking above the surrounding sea, while migrating all his belongings up to remain afloat, each layer growing more cramped than the last. He spends his remaining days alone, his past losses weighing him down, until one day, an event drives him to reminisce on what led him to that point, and find his perspective changing in the process.House of Small Cubes excels at conveying information through both background and foreground details. It’s a marvelous use of the medium of animation, with visible care and purpose put into the composition of every shot; the inward-angled walls of the man’s home, near-empty spaces with singular items present, a collection of framed photos, the somewhat crowded space of his room and other details lend us a well-rounded glimpse of the man’s life; his slumped, apathetic demeanor, sighs, bursts of air bubbles, pauses to put emphasis of items of interest, and fades between past and present tell us his state of mind at any moment. Throughout the film, we’re offered an ever-expanding understanding of him as his story unfolds onscreen. We’re also given a vivid picture of the world he inhabits; passing boats, the surrounding homes of varying heights, two youth running around a grass-bedded tree and many other design elements all convey something of note. It’s poignant, layered and often delicately symbolic.All of this is portrayed through a loose, grainy, well-shaded and softly-coloured sketch aesthetic that’s simultaneously distant and personal; a somber score of tender piano melodies, gentle harp plucks and warm strings that’s simultaneously unobtrusive and inviting. These elements smoothly converge to construct a story touching on ideas of lost love, memory, mortality, meaningful existence and the passage of time, and all in an interesting, effective manner.It’s a bittersweet snippet that reaches heights and depths which few other short films manage. It makes the most of its limited timespan to leave an impact that lingers long after, and the degree of detail present coupled with the minimal time investment make it worth revisiting time and again. It’s tasteful, artful, moving and memorable. For some it may be comforting; for others, harrowing. But without a doubt, it’s worth diving in to find out.