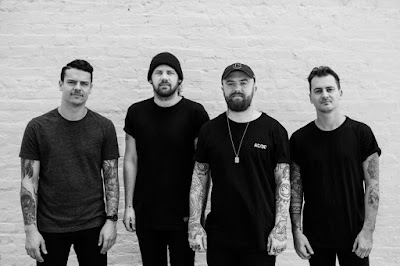 Hay everyone, this week’s been great I recently got recommended some songs by a friend and they are great, so decided am going to be sharing, some with you. So one of the new bands, I have been introduced to is Beartooth, Made up of members both past and present; Caleb Shomo, Oshie Bichar, Taylor Lumley, Kamron Bradbury, Connor Denis, Brandon Mulling and Nick Reed.
Beartooth is an American hardcore punk band formed by Caleb Shomo in Columbus, Ohio in 2012. And after just one year they were signed by Red Bull Records in 2013.
Their type of music and band according to Shomo himself is fun, punk-rock, hardcore, wild music, play crazy shows and have a good time without any pressure from anything.
So here is the I hear;

Its an amazing song with a great message, that came out in 2014.  And talks about a area no one really wants to delve into because of its sensitivity. Punk and hardcore blend perfectly to talk about child and domestic abuse.
Its straightforward, loud and simple, passing the message clear and precise. A great song that you should listen to.
So hope you like it and leave a message for me in the comment section, I would love to hear from you, subscribe to us so you can get updates on all our new content.