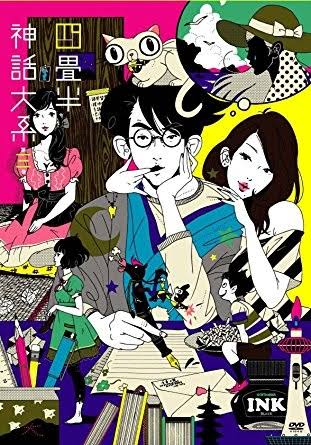 It may take a while to warm up to it, but the story structure is done exceedingly well throughout this series. The unique way it shows the different possibilities and timelines our protagonist lives through is interesting and is even more enhanced by the last two episodes.

Not only is it thought provoking, but it has many respectable morals and philosophies interwoven into the show’s dialogue that some may miss if they don’t look into it, which is something I enjoyed a great deal.

The Tatami Galaxy has a very unique art style to it that sets it apart from its contemporaries. It’s refreshing  to see something that isn’t generic and trying to fit in with the crowd nowadays. The distinct character designs are very well done and help to portray the characters even without knowing their personalities beforehand.

The voice actors fit the characters perfectly and the soundtrack is phenomenal. Not much to complain about here.

While some characters aren’t meant to be more than pieces that move the story forward, those who are meant to play an important role are very well done, especially the main character. This show’s format doesn’t lend to much possibility of character development, so I won’t rate it too harshly regarding that.

I’m sure most people will either love this show or not understand all of the hype that it has garnered, but personally I can say this was an beautifully unique experience that I enjoyed immensely, whether it be its art style, storytelling aspect, or just great characters.

Top 25 Best Sad Heartbreaking Anime That Will Make You Cry