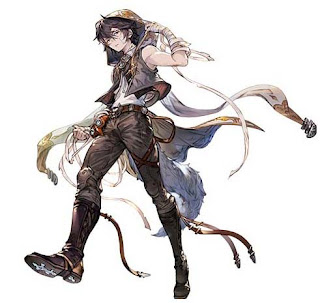 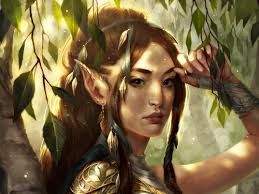 Nighttime quickly came for the city of Kremvor. The town was just as busy as the day as a special event was being put on right now. Music, food, and other festivities was going on the ground while dressing was going for three newcomers in the palace. Mikal, Lilian, and Thiaus were all in separate rooms so they put on their chosen outfits. They were then told to head to the king’s throne room where a large audience would be there for Mikal’s arrival. Lilian was dressed in full purple and black frilly dress with bows all on the bottom. On her feet were black shoes that were tied around her ankle with matching long black stockings. Her hair was in a long ponytail that was kept neat with a lavender colored bow in the back. She had on black eyeliner and black lipstick that made a lot men take interest in her. Next to her, keeping the hungry males off her was Thiaus, dressed in long white robes with a golden sash. He had a white hat that was edge with black and white slippers that would just go on easily.
“I wonder what Mikal is going to look like.” Lilian whispered to Thiaus who nodded to her words.
A line of horns then sounded off as the participators lined up silently. The doors opened as King Windor stood up to see Mikal standing with in a full suit of armor. It was grooved with the same intricate lines that was on his sword which was in a sheath at his hips. Behind him was a blue cloak that flowed as he walked. Lilian was watching him with an agape mouth at him as he made his way towards the king. As he arrived at the bottom stairs, he turned to see two different types of helmets on a table with a different color cloth underneath them. One was a helmet with a blue cross over the eye visors and the other had one with the wings of an angel on the head. He glanced at them, then up at Windor. The throne room was silent.
“Mikal Angelheart, do you choose to be a Paladin or a Knight?” he asked so the whole room was able to hear.
“I choose to be a Knight.” he said, watching as another Knight walked and gave him his helmet.
“Sir Knight Mikal Angelheart, I ask that you kneel.”
Everyone watches as he kneels.
“I hereby name thee.”
He placed a sword over his right shoulder then his left shoulder before holding it up.
“Arise, my new valor Knight of Edonia.”