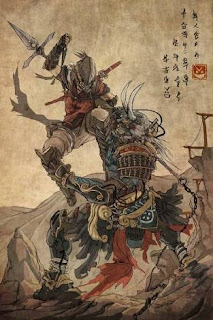 In the Forest of the Shadow Blade, the wind blew by with a quiet hum, going through and around trees and leaves. The leaves were then slowly crashing to the ground and land at the gate entrance of the Satsumi Shrine where three skilled warriors silently waited to start their battle. Haru and Sasume watched as they kept their eyes on the steady hands of their opponent, Katsumi. Katsumi smiled with her eyes closed and rushed forward with inhumane speed, catching both of the siblings off guard. She stopped in front of Sasume who gasped then held her blade up as she cleaved down at her. Their swords connected with a loud bang of metal on metal contact. Sasume grunted and struggled to stay up on her feet as she felt the ground beneath her being pushed down by the force of the sword.

“Feeling a bit under pressure, aren’t you?” she sneered with a small grin.
“Keep away from my sister!” Haru yelled as he with a violent swing at Katsumi’s head.
The female ronin looked over and dodged the attack before her eyes widen at Haru’s movements. After the swing of his sword missed, he forced one foot into the ground and kicked his right foot out, finding his target and connected with her stomach. She skidded back and forced her blade into the ground with a bang. Her breathing was a bit unsteady from the attack that obviously did some damage to her, showing some fatigue as well as she stood slowly and gave her blade a good swing.
“I’m surprised, you actually managed to hit me. Now, I’ll fight seriously.” her eyes narrowed.

Haru and Sasume gripped their blades tighter as Katsumi held her sword with two hands and her weapon began to glow with a white aura. The wind picked up and the clouds came in to cover the sun, making the duo look around in panic and look back at their rival.
“What is she doing?” Sasume asked her brother.
“She’s using the sword’s ninpo.”
“Now you will perish. Shiroichiheisen!”
With a twirl of her blade, Katsumi rushed forward and sliced both Sasume and Haru in the blink of an eye with her ninpo, a translucent white line being visible as both of the siblings stumbled backwards in a stunned state after the attack. Coming to, Sasume gritted her teeth and held the right side while Haru fell to his knee and gripped his left side. Sasume looked over at her brother then over at Katsumi who had a smile before sheathing her sword.
“I hope you realize I missed on purpose.”
“What?” Haru said as he realized what she just said.
“You think I wasn’t gonna notice that your brother sliced me as well as I did him?”
Haru growled and cursed in his head as he stood up with a wince of pain while Sasume held her sword down at her side.
“I believed you were from Kanata the second you defeated my ninjas close range. You both are very skilled indeed. Now, I take it that you both need some medical attention and the name of that sword you wanted to look for.”

Inside the small hut that Katsumi invited them to, her helper in the kimono tended to their injuries and poured them a small cup of green tea before they all started talking.
“Now tell me, what have you heard about this sword that Kanata wants you to find?” Katsumi asked as she takes a sip of tea.
“Well, we really haven’t heard much about it.” Sasume said as she got an eerie look from Katsumi.
“So, i guess a quick lesson is in order.” she said, looking over to her helper.
“I believe so, Miss Katsumi.”
“A long time, before the code of honor, many different clans would do nothing but fight and wage war on one another. This was called Senso no jidai, and for good reason. For hundreds of years, thousands of people died, both warriors and the innocent. Until the discovery of Ninpo…by a woman.”
Both sibling eyes widen, taking in the knowledge from the story.
“Please, continue.” Katsumi’s helper said, pouring everyone another cup of green tea.
“No one knows her real name, instead they all gave her the simple name to remember: Naio. Since then, her teachings as well as her abilities has been passed down from generations to generations. And ever since, ninpo has become a way of fighting.”
“All this is very interesting Katsumi-san,” Haru interrupted. “But how does this relate to the sword our master wants us to find?”
Katsumi looked over to Sasume then sighed and smiled softly.
“Very well, onto the the Seven Swords.” she smiled at their reaction. “That got your attention, didn’t it? Yes, there are seven of these swords, and i have one of them.”
“Where are the others?” Sasume asked.
“In a sacred place you must follow: South Hirashi.”

advert
end of advert
Way of the Blade: Chapter 5 – Onward to Hirashi