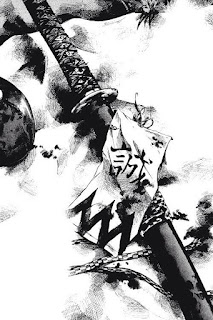 For the entire time being there, Katsumi told the siblings about the land of Hirashi, the area where ninpo is used and blessed with as the magic flow runs through the land’s veins. It’s the longest living land that has ever been around and only those who knows its secret and legends. The sword of flames, ninjas of shadows, and connection to the lands ancient gods are just a few of the stories that has been tossed around from ear to ear. Sasume suggested that they go back to Kanata and report what they have found.

“Well, in a way, you have completed your mission.” Katsumi told them as she took another sip of tea. “Please give my regards to Kanata.”
“You’re not coming with us?” Haru asked quite loudly. “Our master has given us strict orders to-“
“I don’t care much for orders.” Katsumi cut him off with a more serious voice. Haru stopped and furrowed his eyebrows. “Which is why i live out here, by myself  secluded.”
Haru was about to say something in response until Sasume stopped him and bowed in front of Katsumi and her helper. They both walked to the door and exited, going back to their village with their mission complete and information to submit in. Meanwhile, in their small hut, Katsumi stood and walked out back, keeping quiet and looking at the forest trees that rustled in the wind. She stared at the clouds as something was on her mind, something she shouldn’t have talked about to her enemies.
“We talked about that, Katsumi.” the ronin turning around to look at the woman that was considered her ‘helper’. She no longer wore her mask, her green eyes now had a slit in them like an animal, and her facial expression was anything but friendly.

“This is not the time for me to be lectured, Nanami.” Katsumi spoke with certainty. “There will be plenty of time for us to discuss my carelessness for the enemies’ knowledge, but for now let’s focus on what’s really at stake here.”
Nanami watched as her subordinate turned back to the clouds and keep her mindful words to herself. She smiled and narrowed her eyes, looking at the back of the girl she place a seal on and kept with ever since she picked up her sword.
“For a vengeful spirit, you can be a real nuisance.” Katsumi spoke, turning back to see her master with ears and tail of a fox.

Back in the village of Sanahobi, Sasume and Haru headed straight to the temple to report to Kanata.
“This is very concerning news you have brought me.” Kanata said, tapping the armrest of his chair. “Seven of these magical swords.”
“Apparently they are all fused with Ninpo.” Sasume added.
“Ninpo?” Kanata asked, sitting forward in his chair with wide eyes. He never suspected to hear that. “The magical art that has been around since the creation of the lands?”
“Yes master.” Haru answered. “The ronin, Katsumi, has told us that there is a land where the rest of these swords are kept. She hasn’t told us anything else.”
Silence has befallen the entire room after the messages that the siblings have relayed to their master. He sat back in his chair with a grunt and closed his eyes. Sasume and Haru waited for the response of their master, sensing something was wrong with the ominous furrow of his brow.
“She’s hiding something.” Kanata suddenly said.
“Huh?” Sasume said, slightly confused.

“Katsumi, that one is always fond of lying when something is on her mind. I sense something is bigger than it may seem.” Sasume and Haru stayed silent, looking towards each other before turning back to Kanata.
“What should we do master?” Haru spoke up, sounding more determined.
“Where is this place that Katsumi told you about?” he asked, seeming more intrigued than before.
“Hirashi.” Sasume answered. “She said its the land that houses ninpo.”
“I know exactly where it is, Master Kanata.” Orochi spoke up suddenly.
“Orochi?” Sasume said, looking over to her.
“If I go with them, then what we need would be accomplished more easily.”
The siblings looked at each other once more before Kanata smiled and nodded, looking to Orochi.
“Alright, I’ve made my decision.” Kanata said, watching as the trio now stood together side by side. “I’m sending you three to Hirash. But first, find Katsumi again and take her sword. If she has one, then something more sinister is brewing.

2 thoughts on “Way of the Blade: Chapter 5 – Onward to Hirashi”

Favourites of the Day….