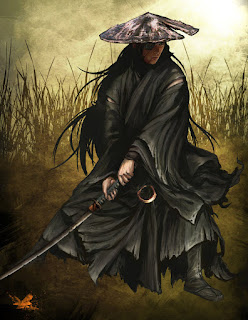 A few light breezes pushed through the trees and leaves of the surrounding forest where four warriors stood.  Orochi, Haru, and Sasume stood as they all looked at the very powerful enemy before them. Nanami licked her index finger and then smiled back at them and pointed straight at Orochi, almost like her eyes could gaze straight behind the mask she wore.

“My dear, sweet Orochi. Have you come to visit me and my servant again?” the fox asked, slowly licking her tongue at her. Sasume and Haru eyes widened and looked over at their companion.
“Orochi-san, you know this demon?” Haru asked, almost like he was demanding a response. Waiting for a response, he looked over to his sister who had her eyes back on Nanami.
“What are you called?” Sasume asked, not sounding scared in the least.
“I’m sure you have heard of me before child.” she said knowingly. “I am a Kitsune, a fox demon that shape shifts into a beautiful, luscious women.”
They listened to her as her tail swayed back and forth. It was very bushy and and fluffy looking. Sasume’s eyes went from her tail to her ears, and then stopped at her animal like eyes. Nanami noticed as well and locked onto her before Haru snapped them both out of their stare down.
“Listen here, demon.!” Haru yelled. “We haven’t come here for you. We came to get a legendary sword from the ronin Katsumi. Will you let us walk pass?”
Nanami looked between all of them and laughed quiet then louder as she heard nothing. Orochi stepped forward as her blade became infused with a glowing light blue aura around the blade. Sasume and Haru looked at it and slowly lowered their weapons as well. Nanami stopped laughing and smiled at her as well, touching her lips softly. At that moment, Katsumi walked out and held her blade in her hand and still in it’s sheath. Her face was expressionless and aimed straight at the siblings who visited before and without Orochi. She stepped besides Nanami and placed her hand in front of her.
“Nanami, I told you I would deal with them myself if they ever came back.” she told her sternly, narrowing her eyes at the three before.
“Awww, but they were acting all tough and I wanted to meet them for myself.” the fox demon said, shifting her body from left to right like a frightened child.
“Why did you come back?” Katsumi asked the siblings, completely ignoring Orochi standing in front of them.

“We need that sword. We fear that it is in bad hands.” Sasume answered.
“My sister is right. Our master-“
“Silence!” Katsumi yelled, quieting them both. “This sword is the salvation of my freedom and vengeance. If you want this sword, then you’ll have to kill me.” she said, unsheathing her sword as it flashed white with a wispy aura.
Haru and Sasume took their stance as the ronin charged them and went pass Orochi who continued to stare at Nanami. She took her mask off and looked at the fox demon with her own eyes as the air and tension began to rise as the second battle began at the start of Orochi flicking her sword at the ready.

Haru jumped back, followed by his sister as Katsumi came down with an overhead swing. Her blade connected with Haru’s, knocking him to the ground as their blades stayed hooked together. Haru greeted his teeth and watched as Sasume moved swiftly as she geared her weapon and swung it at Katsumi’s shoulder, making a deep incision. She inhaled sharply and backed up, both hands still on her sword while Haru stood up and moved in with a flurry of strikes, each one being countered by her, but just barely. Her wound slowing her down tremendously and costing her another wound as Haru made another slice wound on her gut. It wasn’t as deep, but still shot a stinging pain through her stomach. Her blood dripped on the floor as she held herself up by her sword. She gritted her teeth and stood up fully, looking between the siblings then peered behind her quickly.
“You don’t understand.” Katsumi spoke, twirling her blade as she lowered her stance along with Sasume and Haru. “I need this sword and Nanami for my life. Without them both, I am nothing.”
“What’s so special about that blade?” Haru questioned. “It causes destruction and chaos for everyone who gets in its way. It should not be in the hands of anyone. It was not made for vengeance.”
“Maybe not,” Katsumi said, gripping the sword tightly as she stared at them intently. “But that is what I will use it for.” she yelled, rushing at them again.

A loud crash was heard as Nanami and Orochi clashed, holding themselves all the while they grinned at each other and pushed away from each other with great force. Nanami created blazing fireballs with both of her hands and flung them at Orochi. With her blade, she sliced both of them out the air and watched as they fizzed out of oxygen and died out. Orochi rushed forward and twirled her blade around her body to create a trail of sharp water. It came around her waist and ended at the edge of her blade before thrusting out towards Nanami who narrowed her eyes, realising how serious the battle had gotten. Her attack knocked against her defence of fire and shattered it into a flurry of water droplets and fire segments. She stumbled backwards as Ororchi quickly moved forward and stabbed her shoulder, causing the kitsune to scream in sharp pain. She then smiled down at her opponent as her left hand called forth her own sword out of thin air and slashed down at Orochi. She swiped her blade out and quickly stepped back as Nanami turned the ground she was just standing on into charred ashes and brunt grass blades. They took a chance to admire their strength and sized each other up for another wicked battle.
“You have gotten much stronger since the last time we’ve fought, my dear.” Nanami said, holding her blade right under her eyes so she could only see Orochi’s head. “I must say, you have grown stronger, my love.”

“Enough with the slick words, Nanami.” she sternly said, still feeling a burning sensation on her right cheek. “You know Kanata-sama was awaiting for your arrival.”
“Oh yeah, I have forgotten about him. Is he well?” she asked, faking her feelings and having a pouty face. “I’m sorry I haven’t come by, but I’ve been searching and finding new friends to play with.”
Orochi snarled and rushed at her again, yelling as she got ready to attack Nanami again. The fox demon shrugged and readied herself.
“Whatever, my servant is going to die anyway.”

Haru and Sasume kept their focus on the ronin who apparently was out of breath, close to death, and unfocused as her legs, chest, and arms had slices and incisions in them from their blades. She gritted her teeth and stared at them. Her legs gave out and her weapon dropped to the ground  and her blood leaked down her arms as her eyes were wavering in and out before she fell to the ground. Her lifeless body remained motionless as Sasume finally realised what she has done. She had killed her very first enemy.

Way of the Blade: Chapter 8 – Water and Fire